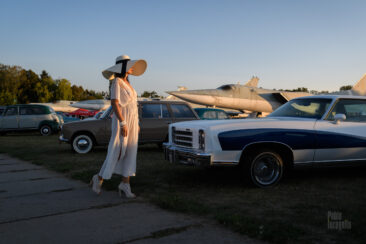 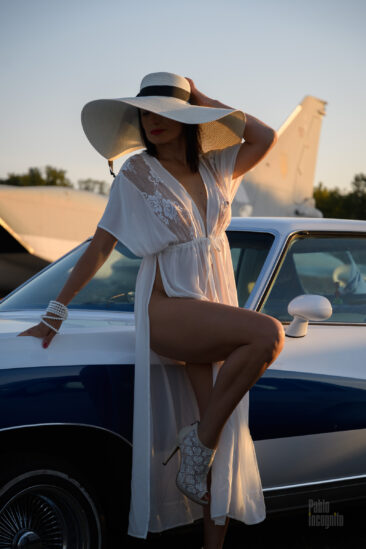 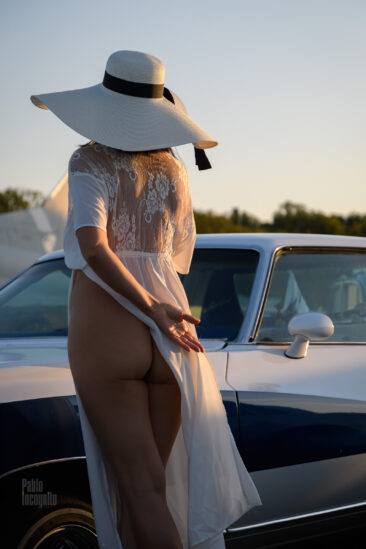 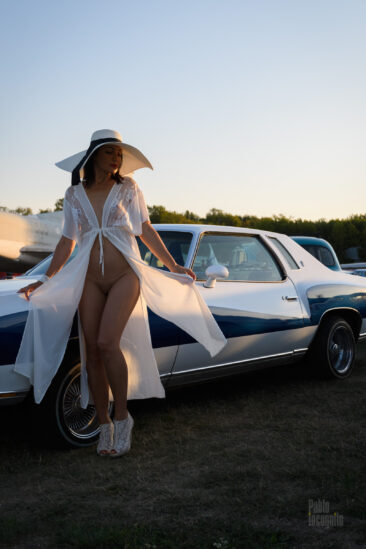 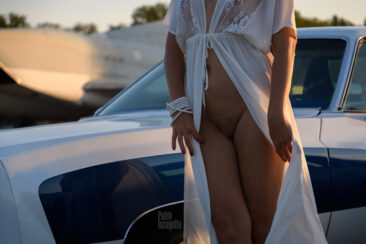 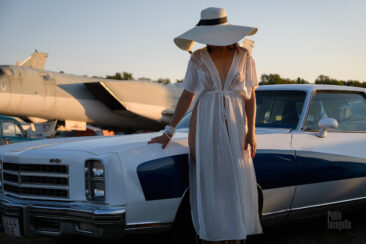 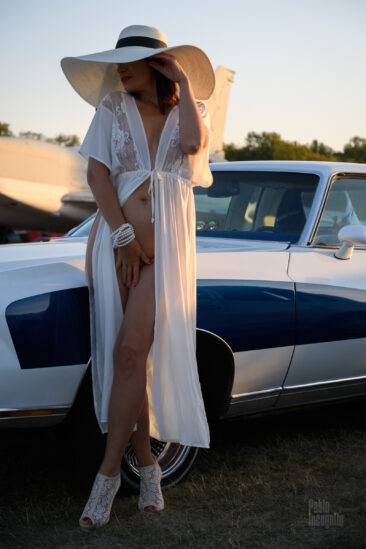 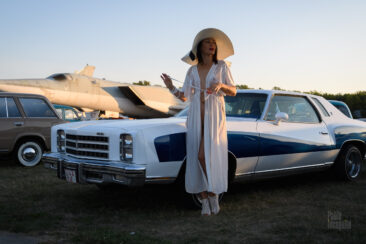 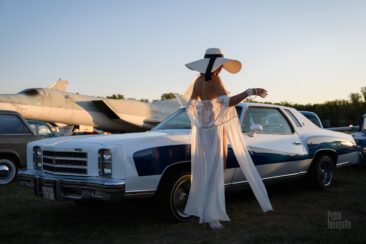 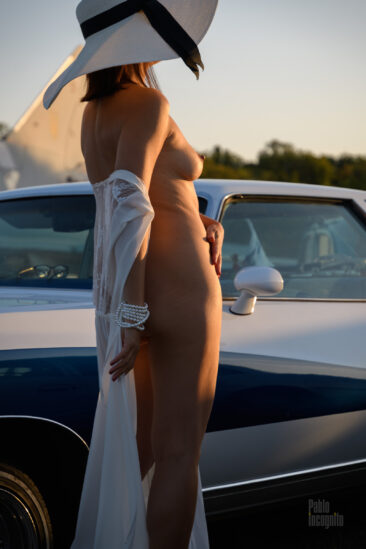 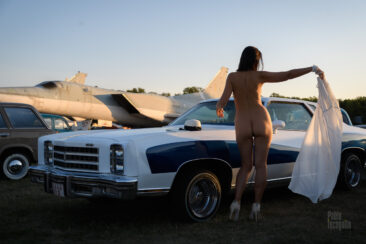 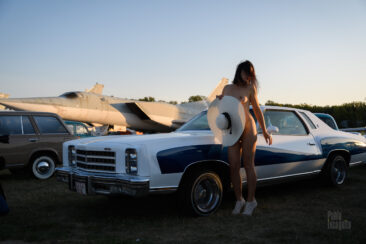 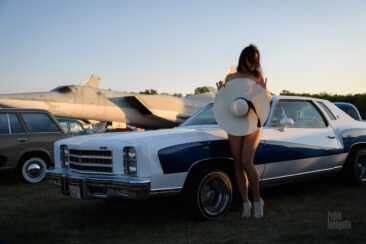 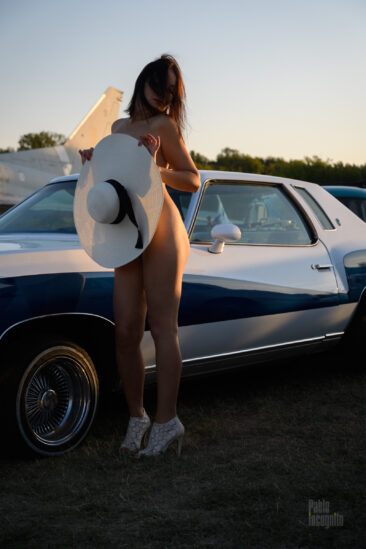 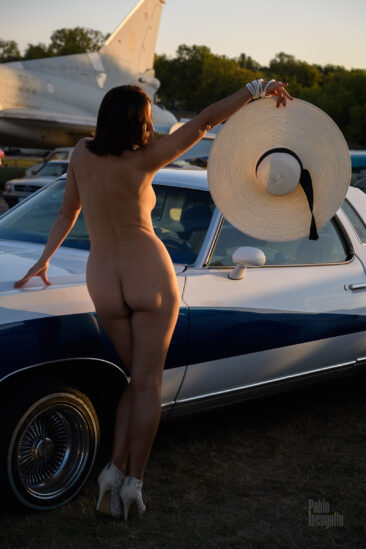 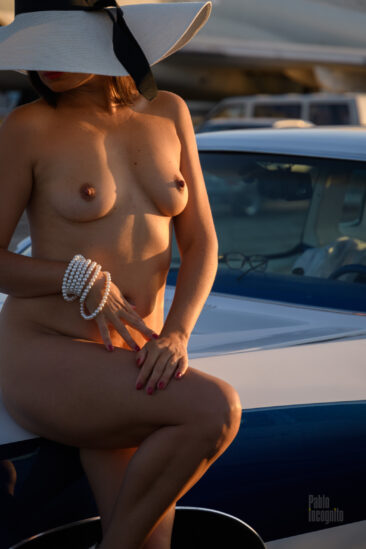 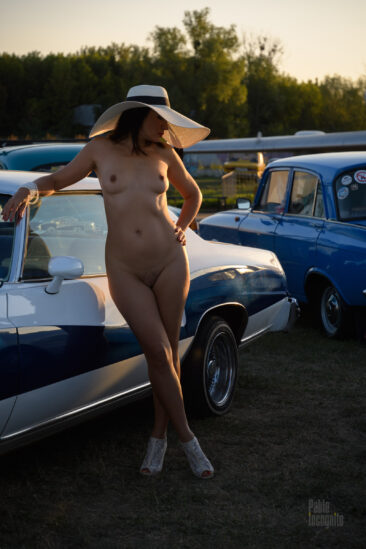 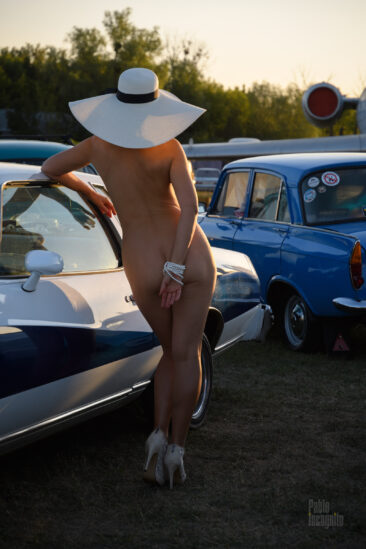 The decision to go to the exhibition of vintage cars was made in the evening, and in the morning we were on our way. It would be unforgivable to miss such a rare opportunity (to take pictures next to unique cars)…

This photoset is one of several taken on that sunny September morning in Kiev, near the Zhulyany airport, in the open–air aviation museum, at the annual “Retroslet Old Car” exhibition.

Pablo, preparing the photos, said that he wants to publish a photo story with a new car every week. So right up to the New Year, and maybe even until St. Valentine ? we will entertain you with cute photo stories with vintage cars, shot on the morning of September 13th. We got a lot of interesting pin–up, glamor and nude looks.

So, everything in order…

We arrived at the exhibition on September 12, in the midst of the event. We walked for three hours. I was in two looks:

On this day, about two thousand frames were shot, from which an interesting photo report “Pin–up in Zhuliany 2020” was obtained (look, I recommend it?).

The most interesting thing is that the visitors of the exhibition perceived me as a regular “animator”. Someone just photographed me, and those who are bolder asked to be photographed with me. At first I was confused, this was the first time I had such a situation, but then I got used to it and took pictures with everyone with pleasure. So do not be surprised if you see a photo of me in someone’s private collection of photographs, because our world is so small and we all know each other through someone.

On the first day, of course, we couldn’t take pictures in the “Nude” genre, the shocking “Pin–up” genre was quite enough for the audience! Even my humble exposure of suspenders and stockings confused some viewers. I think that those who witnessed these pranks will remember the exhibition for a long time.

On the morning of September 13, at 5:45 am, we are again at the exhibition. We only had 2 hours to shoot (from 6:00 to 8:00) until the participants and first visitors started arriving. At 7:55 am we stopped taking pictures and moved to another part of the museum — to the alley with planes (this short but romantic nude photo session will also be published on the website, but a little later).

Since I was photographed near the Chevrolet Monte Carlo when the sun had already risen, the photos were very warm and romantic. As if the lady had just woken up, put on her peignoir and went to see how her favorite little car was. And the sun is so affectionate and the mood is so airy that she decided to undress and show off. And then the paparazzi took and photographed how she flirtatiously and leisurely performs a striptease. And then he took and published these photos for everyone to see on his author’s website. And this was the paparazzi Pablo Incognito — a nude photographer who recently created a direction in nude photography “modern Ukrainian social erotica”.

We didn’t have much time, and I could give Chevrolet only 4 minutes. Then I changed into a different look and went to another car, no less charismatic and elegant than the previous one. I went as to an interesting man (if we compare cars with men?) to flirt with him and, perhaps, seduce…

There will be more further. Start every morning by viewing Pablo Incognito’s photo stories. This activity will set your day on a positive wave!