This is a classic video backstage of the nude photo session of Pablo Incognito, filmed in an abandoned public building.

When editing the video, Pablo decided to leave it the way it turned out initially — filled with funny and awkward moments, in one word “reality show”:

And only our most attentive viewers, if they study the output of the photoset and compare the facts, will be able to understand interesting information about the season and the year, as well as the country and city where and when this photo shoot took place… 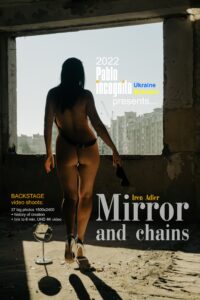